Honoring the 200th Anniversary of the Death of Thaddeus Kosciuszko 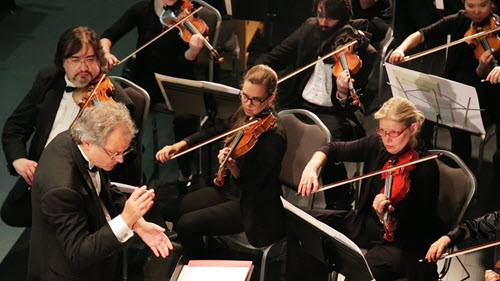 The Lincolnwood Chamber Orchestra gives its third annual performance at Taste of Polonia, again in partnership with the Chicago Chopin Society.

With music of Chopin, Sousa, Kosciuszko, Ward, Oginski, Vieuxtemps, Kurpinski, and a new work “Suite for Heroes” by Jaroslaw Golembiowski

The concert is sponsored by the Polish National Alliance.

2017 marks the 200th anniversary of the death of Thaddeus Kosciuszko, a political leader and military engineer and strategist. In recognition of his activity for the sake of peace, independence, and democracy, Polish-born Thaddeus Kosciuszko (1746-1817) is considered a national hero in Poland, Belarus, Lithuania, and in the United States, where he fought in the American Revolutionary War. In Poland, he fought for the equality of all citizens: peasants, Jews who were a religious minority, women, and other people who were discriminated against. He was a precursor of the development of national awareness in its modern sense, encompassing all social strata and groups. In his fight for freedom and independence, he favored peaceful solutions. The ideas and views and which Kosciuszko advocated still remain relevant and important today.

The Lincolnwood Chamber Orchestra is one of Chicago’s finest free-lance professional ensembles. It has performed on numerous occasions at the Copernicus Center, including on the Sir Georg Solti Memorial Festival in 2016. The orchestra is part of American Music Festivals, and regularly collaborates with communities across Chicagoland. It has appeared throughout Lincolnwood and at diverse venues like the Harris Theater, Chicago Cultural Center, and North Shore Center for the Performing Arts, Illinois Holocaust Museum, American Islamic College, and the Chinatown Branch of the Chicago Public Library.

Philip Simmons is Artistic Director of American Music Festivals. He has conducted in twenty one countries, performing in the Great Hall of the Tchaikovsky Conservatory, the Musikverein, Carnegie Hall, and Chicago’s Symphony Center. Music Director of the LCO and Resident Conductor of the Orchestra of the Hawaiian Islands, he is a passionate advocate for community and educational outreach, and making classical music relevant today.

Jaroslaw Golembiowski is President and Founder of the Chicago Chopin Society. The composer/pianist is one of the leading Polish-American musicians in the USA, recently receiving the Cultural Achievement Award 2017 from the American Council for Polish Culture. His music has been performed throughout North America and Europe, and he recently finished his fifth CD recording “Adorations,” with violinist Krzysztof Zimowski.

POLISH-AMERICAN FRIENDSHIP CONCERT
Honoring the 200th Anniversary of the Death of Thaddeus Kosciuszko
is part of the 2017-18 Cultural Exchange Festival
presented by American Music Festivals and the Chicago Chopin Society
It includes “Christmas Spectacular: A Sing-Along Messiah and International Carols”
on December 17 at the Copernicus Center.

Founded in 2006, the Chicago Chopin Society is a nonprofit creating greater interest in Polish music and its significance in American culture. It actively supports composers, musicians, and arts organizations by presenting events that invite young and distinguished artists to perform. CCS has collaborated with countless Polish-American organizations, celebrating the anniversaries of Chopin (2010), Szymanowski (2012), and Lutoslawski (2016). The Society is looking forward to its upcoming programming for the year of Kosciuszko and the 100th Anniversary of Polish Independence in 2018.

Founded in 1997, American Music Festivals is a nonprofit promoting American music and cultural exchange. Its orchestral programming focuses on diversity, and its reach around the world has helped program concerts in Saint Petersburg, Prague, Sarajevo, Minsk, Varna, Belgrade, and Sendai. In the USA, American Music Festivals presents the Lincolnwood Chamber Orchestra and Orchestra of the Hawaiian Islands. AMF’s former Artistic Advisors are bass-baritone William Warfield and composer/conductor Lukas Foss. Through promoting the humanities, AMF helps brings communities together.

The Chicago Chopin Society and American Music Festivals believe that cultural exchange and collaboration are critical in effectively delivering classical music to new and existing audiences. Building upon their acclaimed concerts in Chicago’s Polish community, they proudly present in friendship this four concert series.

The Festival is a coming together of American Music Festivals’ mission of diversity and Chicago Chopin Society’s desire to create a broader understanding of Polish music and history. By connecting cultures and exploring musical languages we celebrate our differences and similarities. The Festival includes American, Slavic, and world music. It features world premieres and classic repertoire, alongside pop and folk selections. Whatever your taste in music, we invite you to enjoy the diversity of the 2017-18 Cultural Exchange Festival.