Fully costumed Polish Winged Hussars will be strolling the Taste of Polonia Festival grounds on Friday, Saturday and Sunday; Mike Sieczkowski & Michael Peplow.  One Hussar will also be accompany by a 17th Century Polish noblewoman.

PLUS:  A special Hussar table will be available inside the Copernicus Center with additional Hussar items and some give away literature. 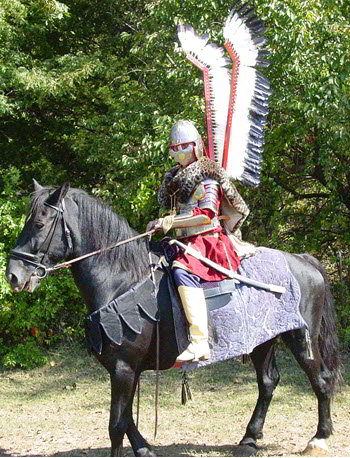 Mike Sieczkowski, the Polish Hussar, will be with us on Saturday and Sunday! Mike is a native Chicagoan who grew up at Addison and Milwaukee. He has been portraying a Polish Hussar since 2006 and has participated in events from Baltimore to Chicago to Kansas City. In 2010 Mike had the pleasure of participating in a reenactment in Warsaw, Poland. The goal of his portrayal of a Hussar is to teach the young about the richness of our Polish heritage and to rekindle in the elderly memories of long ago stories of the dedication and honor of those who would defend Poland against her enemies.

As your army stands deployed for battle, you scan the enemy’s lines across the field. Cavalrymen in crimson riding coats begin their advance toward you, slowly at first, saving their horses’ strength for the last moments of the charge. As the oncoming army gathers speed your own horses become skittish and a strange roaring whistle grows in the air above the pounding of hooves. Your stomach tightens and a cold sweat breaks across you. Mounted on horses sixteen to seventeen hands high the approaching horsemen appear even more gigantic as you see sweeping wings of eagle feathers arch high over their steel-clad heads. Above the disciplined ranks of thundering iron figures flutter enormous standards bearing images of a white eagle on a blood red field and others showing the winged Archangel, Michael. Fantastic cloaks and saddle cloths of wolf, tiger, and leopard skins flap around every soldier as they continue their ominous attack. As you begin your counter-charge, the galloping knights lower gold-leaf covered lances with streaming pennons for the final impact. You vow to yourself that if you survive this day you will never forget your encounter with the winged Hussars of Poland.

Throughout the period of the Renaissance, the Polish-Lithuanian Commonwealth found itself in a constant defensive posture against the territorial ambitions of Austria, Hungary, Muscovy, Sweden, the Ottoman Empire and the rebellious nature of Poland’s Cossack allies in Ukraine. The Hussars were active across half the face of Europe; from the forests of Muscovy where they installed a Polish Tsar on the throne of Russia, eastern Germany, southern Ukraine and even Vienna where they defeated a vastly superior Turkish army in 1683. For nearly two hundred years the frontier nobility of the commonwealth were born, grew up, and died in the saddle.

In 1569 the crowns of Poland and Lithuania were merged by the Union of Lublin. Thus was created what was to become the first modern democracy and the largest state in Europe. Its territories included Poland, Lithuania, Silesia, East Prussia, Kievan Russia, and Ukraine. Thereafter, Polish kings had no hereditary rights but were elected by the nobility, or Szlachta, and the parliament of the Commonwealth, the Seym. The population of the Commonwealth consisted of Slavs, Lithuanians, various Balts, Germans, Tatars of tribal, Muslim, and even Christian faiths, Armenian merchants, Jews, and a remarkably large population of Scottish settlers (as many as 37,000 according to a recent estimate). Religious tolerance was a fact of law. Poland had a much higher proportion of nobility to the other classes, ten percent as opposed to the one or two percent norm for the rest of Europe. Within the Commonwealth the nobility had all the freedom they could wish for and all, from the richest magnate to the poorest farming gentry, considered themselves equals. Not without justifiable pride could they say Polannus Equas Sum “a Pole is the equal of all”.

The soldiers that expanded and defended the frontiers of the Polish-Lithuanian Commonwealth were the Towarzysz Husaria (comrade hussars). Poland has long been renowned for her horse breeding and this was readily apparent in her armies. A Polish military force would generally be made up of 60-75% cavalry, a third of these being Hussars. Other types of cavalry included medium, mail-armored Pancerni (panzers), unarmored light “Cossacks”, and cavalry of the German reiter type.

The armor and equipment of the Hussar must surely be the most beautiful and costly ever seen in Europe and perhaps even the world. The nobles of Poland made conspicuous display of their wealth and standing in their civilian and military dress. Oriental brocades, precious gems, exotic furs, and lavishly decorated armor were de riguer for the Hussars. Over his long riding coat and breeches the Hussar wore three-quarter armor of the Venetian anima style. On his head he wore an eastern style szyszak helmet. The most striking feature of the Hussar’s armor were the wing or pair of wings that were mounted on the back plate of his armor. These consisted of a curved wooden frame decorated with gold and rich fabrics, and a row of eagle or vulture feathers inserted along the back edge. During a charge air passing through the wings created a whirring sound that served to unnerve the opponents’ horses and may also have helped to spur the Hussar’s own horse forward.

The Hussar armed himself with a sabre, bow and arrows of Mongol fashion, short carbine pistols on his saddle and even pistols thrust into his boots. In addition to an 18 foot lance, the Hussar carried a second sword called a pallasz strapped to his saddle. This sword had a sabre grip and a straight, edgeless blade between four and six feet long. The cross-section of the blade was square like a fireplace poker and was used to pierce armor once the Hussar had lost or broken his lance.

Horses were highly prized and no expenses were spared in their presentation. Even the cosmopolitan and fashion conscious French were taken aback by the outrageous public displays of Polish delegations. Horses were shod with gold and silver shoes that were designed to fall lose in the streets as they went and some nobles took to the Turkish practice of dyeing the lower portions of their horses red or green. Saddle cloths were often of ‘Persian rug’ style weave and the skins of predatory animals were also used as saddle coverings. A tiger or wolf skin might be draped over the horse so that the animal’s head made a cap for the horse and its legs hung down along the legs of the horse. In some instances this was even done with the skins of polar bears. Harness was decorated with gold studs and gems set in gold and silver mountings. Along with a profusion of silk tassels and braided leather knotwork, these made the hussar’s horse as beautiful and threatening as its rider.

Although during the 18th and 19th centuries the Polish Commonwealth suffered greatly at the hands of Russia, Prussia, and Austria, we will never forget the men that defended the first European democracy. The iron men with eagles’ wings.

Here is a list of major battles won by Polish and Lithuanian forces in the 16th and 17th centuries, some won solely by cavalry.

Where the army was led by Lithuanian commanders, a note is made.