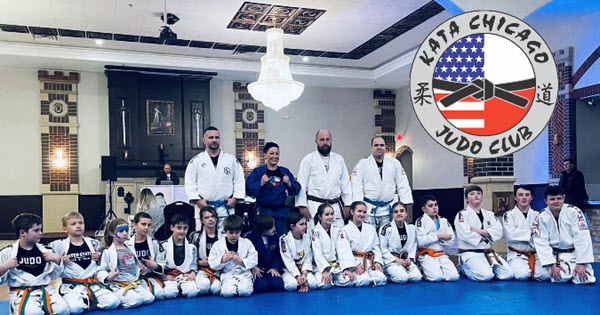 This Japanese martial art was founded in 1882. It is also an Olympic sport.  Holds and leverage are used to bring the opponent to yield. Techniques generally intend to turn an opponent’s force to one’s own advantage rather than to oppose the force directly. The word “judo” can be broken down into two parts: “ju” meaning “gentle,” and “do meaning “way,” which together means, “gentle way.” This judo definition represents one of the martial art’s major concepts, that gentleness controls hardness.  Kata Chicago Judo Club is a traditional dojo, practicing the high moral principles of the sport.

The World Judo Day is a special day dedicated to Judo fans all over the world.  Every year on October 28th, the birthday of the founder of Judo, Jigoro Kano, dojos around the globe participate using an annual theme. The theme for the Day in 2022 is → Inclusion. Contact Kata Chicago Judo Club for more information.

Kata Chicago Judo Club was founded by Sensei Katarzyna (Kasia) Lapinska-Jablonski [Belt: Third dan – black belt]. Kasia loved martial arts and for many years worked with youth in Poland. After migrating to the USA in 2013, this love led her to opening her Chicago dojo in 2016.

Kasia is a Master of Physical Education, USA and USJA Certified Judo Coach.  With the help of Shihan Lesław Samitowski and Jaga Samitowska from Kanku Karate Kyokushin Club located at Belmont/Austin – she started her Judo Club sharing space in their Dojo. After 6 years everything is going very well for both Clubs. Sensei Robert Malachwiejew and Sensei Tomasz Gustaw are the two other coaches who work hard with Sensei Kasia to give kids the best quality of learning because :

KATA CHICAGO JUDO CLUB is often invited to showcase Judo for Polish Schools, Picnics and events. They support many charities and events. Every year they participate in Camps and Judo Tournaments. 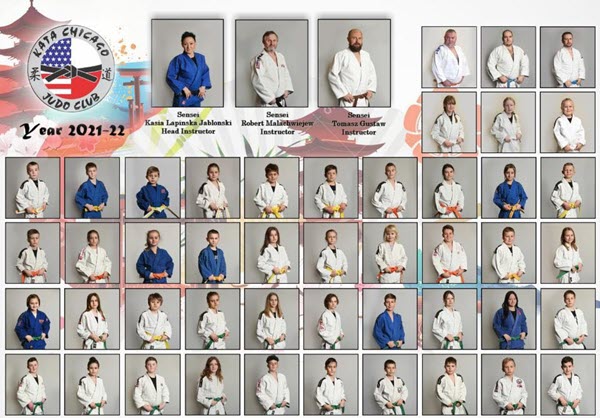 With years of experience from Poland as a Physical Education and Science Teacher, sensei Kasia is able to create a special place for many European kids to learn the beautiful sport as well develop their language, and socialize. Sensei Kasia is also a Teacher ( Polska Szkola im.Trojcy Swietej in Chicago and Orzel Bialy in Hoffman Estates) and puts a lot of effort into teaching culture and developing high esteem among kids.

Kata Chicago Judo Club practices three times a week – Tuesday, Thursday and Sunday. The most used language in Dojo is Polish, as 90% of the kids are Polish, Ukrainian and Chech. Current enrollment is around 60 kids ranging from 5 to 16 years old, plus adults.

Kata Chicago Judo Club also interacts with all USA Judo Clubs in the area and throughout the USA. Every year, with big successes and many medals, they  compete in various Judo Tournaments nation wide.

At Kata Chicago Judo Club, students have the ability to learn and practice judo techniques which help them develop basic and fundamental physical fitness, and self-defense methods through the development of strength, flexibility, speed, explosive power, and endurance. At the dojo, students also learn many important social skills, including the acceptance of others, support of our peers, the value of competition, and the importance of teamwork. Through this fair and positive sportsmanship, kids develop the ability to form life-lasting friendships and bonds. They create something special and become ONE BIG JUDO FAMILY.

Judo teaches us to be gentle and kind, yet firm and strong, both mentally and physically. So, that is why at Kata Chicago Judo Club they believe in the true beauty of this martial art sport.