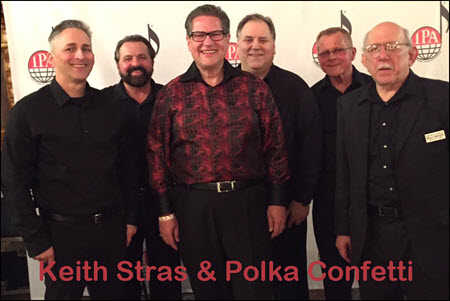 In 2016 he’s celebrating a 40 year career in the genre. Elected to the Polka Music hall of Fame in 1999, he’s been heard each week on the air in Chicagoland over WPNA 1490 AM, Nationwide on Sirius XM Satellite and The Polka Jammer Network.

He’s a member of the prestigious Broadcasters Hall of Fame. In addition, you can see Keith on the nationally televised Jimmy Sturr Show where he serves as the programs emcee each week on RFD-TV.

While the President of the International Polka Association based in Chicago, he grew the membership rolls to over 1,000, to date a distinction that no other officer has matched, while on television he creatively mixed polka music with comedy, local celebrities and game show stunts earning him televisions prestigious Emmy Award.  In 2002 he walked the red carpet in Los Angeles to pick up A Grammy Award for the Best Polka Recording.

In 1994 he opened K & C Entertainment in Chicago and brought the biggest polka entertainers to Chicago and brought busloads of people to venues around the country to participate in polka events. In 2009 he ventured into the polkas in a new way, by forming Polka Confetti, building on his knowledge of the music, he sought out the finest musicians in the industry to form the group. They have appeared across the country, recorded both a DVD and CD and their appearances on televisions Mollie B Polka Party has played to rave reviews. Stras has been one of the most influential people in polka music for the last four decades, and is excited to bring Polka Confetti to the Copernicus Center this Labor Day.

Want to book this band for your event?