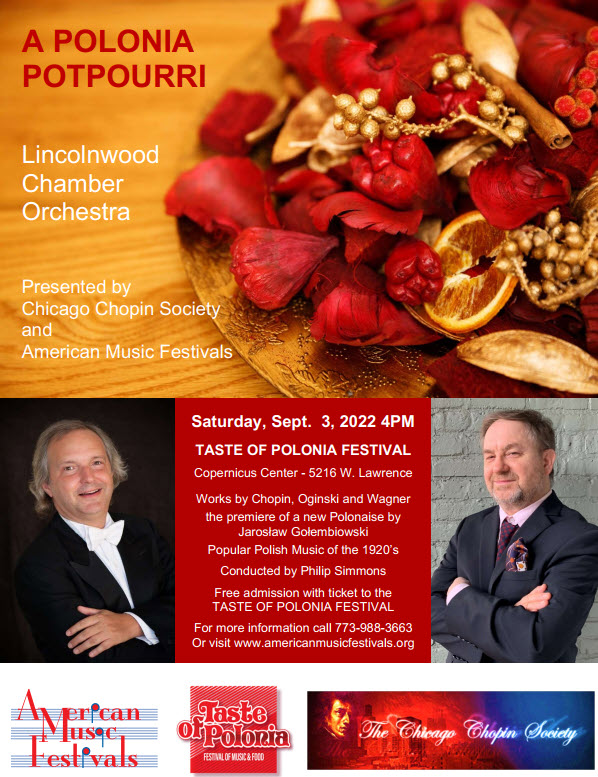 Polonia Potpourri Concert will include works by Chopin, Oginski and Wagner along with the premiere of a new Polonaise by Jaroslaw Golembiowski and popular Polish Music of the 1920’s.

About the Polonia Potpourri Concert Artists:

The Lincolnwood Chamber Orchestra has performed throughout Chicagoland for over 30 years.  Highlights have included the Sir Georg Solti Memorial Festival (with members of the Chicago Symphony Orchestra, 2016, Copernicus Center) and concerts at the Harris Theatre and North Shore Center for the Performing Arts. The orchestra performs at a variety of venues in diverse communities, with recent concerts at the Baha’i House of Worship, Ukrainian National Museum of Chicago, DuSable Museum of African American History, Benito Juarez Community Academy, and the Oriental Institute of the University of Chicago.

Philip Simmons is Artistic Director of American Music Festivals, Founder and Music Director of the Lincolnwood Chamber Orchestra, and Resident Conductor of the Orchestra of the Hawaiian Islands. He has conducted extensively in Eastern Europe, working with orchestras like the Saint Petersburg Philharmonic, Russian State Symphony, and Sarajevo Philharmonic, and throughout the Czech Republic. Maestro Simmons was previously Associate conductor with the Orchestra of the Hermitage Theatre, principal guest conductor of the Sochi Chamber Orchestra, and at the invitation of the US Embassy in Minsk led the premiere of “West Side Story” with the State Music Theatre of Belarus. He has conducted nearly 50 concerts at the Copernicus Center in Chicago with the Lincolnwood Chamber Orchestra, Lake Shore Symphony Orchestra, and on the Chicago Silent Summer Film Festival.

Jaroslaw Golembiowski is the founder and president of the Chicago Chopin Society. He received the degree of Doctor of Musical Arts in Music Composition from the Fryderyk Chopin University in Warsaw, Poland. A composer of over 300 works, Dr. Golembiowski is well known for his compositions honoring Polish heritage. In 2016, he was distinguished as the Outstanding Pole Abroad in the Culture Division by the Teraz Polska Foundation and, in 2017, he received the American Council for Polish Culture (ACPC) Achievement Award. Golembiowski’s music has been performed throughout the United States, Poland, Russia, China, Mexico, and Cuba. His 2018 composition “Polonaise Polonia Restituta” has been broadcast around the world on Polish TV. As a pianist, he regularly performs the music of Chopin, Paderewski, as well as his own original works. In 2018, the CD Adoration and Reminiscences with violinist Krzysztof Zimowski was released.

The Chicago Chopin Society and American Music Festivals have collaborated on many programs with the Lincolnwood Chamber Orchestra celebrating cultural exchange. Most recently in 2020 with the American premiere of Paderewski’s suite for strings in Skokie, IL a highlight of that year’s ACPC Conference. Previous programs at the Taste of Polonia include “Old Traditions–New Frontiers” (2019), “200th Anniversary of the Death of Thaddeus Kosciuszko” (2017), and “Poland’s Great Composers” (2016).  They also co-presented two “Christmas Spectaculars” at the Copernicus Center, the “2017–2018 International Cultural Exchange Festival” (four concerts at various Chicago venues), and in September 2018 the fundraising concert, “Save St. Adalbert Church.” Both nonprofit organizations are committed to presenting programs that bring people together to enjoy the beauty of music.