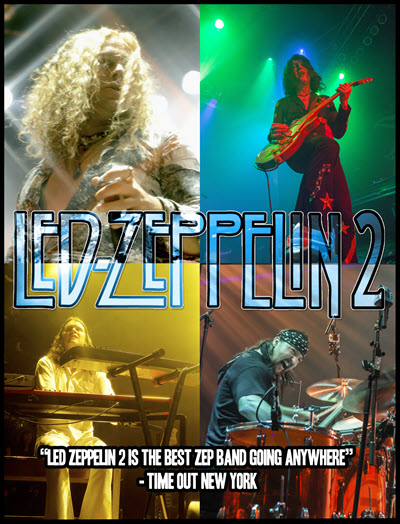 LZ2 delivers the intense, raw energy and dynamics of songs such as Whole Lotta Love,  Stairway to Heaven,  Kashmir,  Dazed & Confused and many more from the entire catalog of Zeppelin studio.

They have performed across the US and draw rave reviews for a “spot-on” Zeppelin show, playing both deep cuts and classic tracks from the entire Zep studio.

“Imitation is the sincerest form of flattery, and in the case of Led Zeppelin 2, it’s one of the best.”  –  CHICAGO SUN-TIMES

“Led Zeppelin 2 is a tribute band devoted to replicating the live shows of the legendary hard-rock dinosaurs. The band is on its way out of the minor leagues, and is now playing bigger venues for a generation of fans too young to have ever experienced the genuine article.”  –  THE NEW YORKER