The band merges diverse styles and influences together in an eclectic mix of Rock, Alternative, Pop, Metal, and Blues. The results are far from typical of most bands on the scene today. – JakTripper flat out rocks! 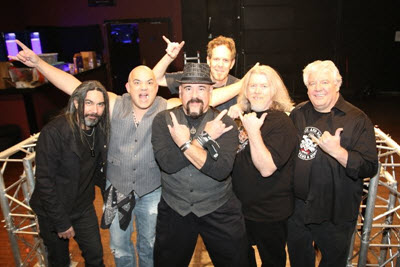 DOUG McBRIDE
Doug supplies the lead vox. He is an engaging front man, who has a knack for sounding just like just about any artist he covers. He’s sung for the likes of Hoipolloi, and Jambuoy. Totally at home with the jaktripper experience, Doug is no slouch on the guitar, or drums, either.

ROY SILVA
Heavy Metal Roy has been on the scene for quite a while. Whether playing bass, drums, guitar, or singing lead and backup vocals, Roy is a true showman (ham). You may have seen him in the band X-Side. He is a virtual encyclopedia of songs, so almost nothing is off limits. Roy “IS” Heavy Metal! Enough said — you’ll see!

JEFF BUNAG
Jefferson Hair Pie lays down the beat like no other. Well versed in all styles, Jeff is the rhythmic foundation of the Jaktripper experience. He’s been doing it with a vengeance in bands like X-Side and Jambuoy. He gets his name from his big, thick mane. Chicks just dig his hair! And so do we.

JOHN BRAUN
Johnny WaD is the sonic glue that holds Jaktripper together. He makes his six string sing, and his melodic solos rival those of the guitarists he emulates. You may have seen him in LA with the band Wired, or in the local bands Jambuoy and X-Side. Lead and backing volcals round out Johnny’s resume. John enjoys nachos and big wads of cash!

DARREN HAWKINSON
Derb provides thunderous in the pocket bass chops that will leave the weaker at heart quaking in their boots. He also makes a mean tuna casserole. Previously in the bands Hoipolloi and Jambuoy, Derb was named after the self invented wresting hold the “derbus,” which he developed in a brief stint with the WWF.