A Rock ‘n Roll Tribute – From Elvis to The Beatles! 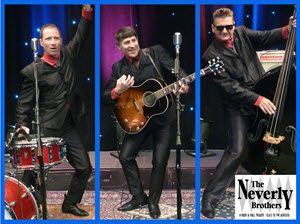 The Neverly Brothers concerts are a tribute to one of the most exciting chapters in music history: the birth, near death and resurrection of rock & roll. Their one-of-a-kind high energy stage performances take you on a musical guided tour of rock history – from 1955 to 1965.

The first half of their concert pays tribute to the music created by the 1950s American Rock n’ Roll pioneers – which by 1960 had become a distant memory but became the inspiration for the next wave of young rock bands from Britain. The second half then pays tribute to the 1964 British Invasion bands that re-recorded the forgotten 1950s American rock music â€“ along with lesser known early 1960s rhythm &amp; blues songs, recorded their own original songs and pulled Rock n’ Roll from the edge of extinction by re-inventing and re-energizing it for a new generation.

You’ll learn rock history and be thoroughly entertained with their chronological song sequence, stories behind the music and vintage wardrobe changes. Their repertoire consists of show-stopping renditions of early hits by Jerry Lee Lewis (Great balls of fire), Chuck Berry (Johnny B. Goode), Eddie Cochran (Summertime blues), Buddy Holly (That’ell be the day), The Beatles (Twist & Shout), The Rolling Stones (Satisfaction), The Kinks (You really got me), The Dave Clark Five(Glad all over) and more!

Hop aboard our virtual tour bus and fasten your seat belts for an exciting MAGICAL HISTORY TOUR!

Love these guys? Catch The Neverly Brothers at other annual festivals too!  Here’s a partial list: