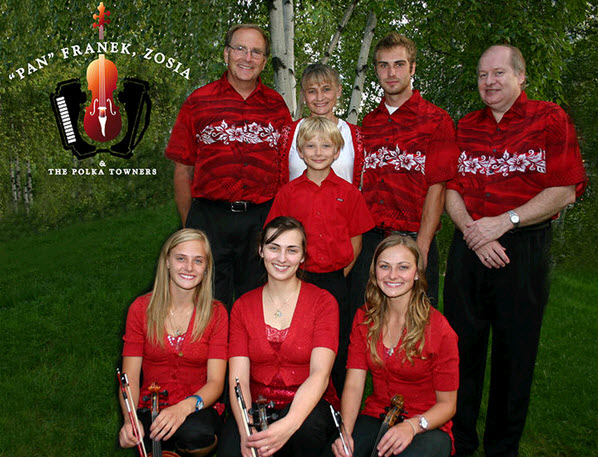 The Polka Towners, under the leadership of Frank Piotrowski of Muskegon, Michigan, originated in 1972 and today features the talents of the Piotrowski family. They played locally for approximately two years until in 1975 they were asked to perform at the IPA (International Polka Association) Convention held in Milwaukee, Wisconsin. At this appearance, their first out of state, they found themselves flooded with appearance requests, this time from all over the country. In the next year they appeared in Pennsylvania, Connecticut, Ohio, and New York, just to name a few.

In 1976, they recorded their first LP, Around the World. The title was taken from a song arranged by their band about their fat trumpet player and his encounters on a trip around the world. Following the popularity of this recording they were asked to perform at many more festivals and events all over the country. Soon after, they recorded Polish Party (Polska Zabawa). It featured a variety of Polish and English tunes. In 1980 the Polka Towners released two albums – Polka Showtime, an album featuring many old Polish songs which have been lost throughout the years, and “Pan” Franek Spiewa a Polskie Religyne Piesni, a Polish religious LP featuring many religious hymns sung in Polish parishes throughout the year.

In 1981, “Pan” Franek married Zofia (Zosia) Gasior of Brzeziny, Poland. Now the Polka Towners had a female vocalist and a new name – “Pan” Franek, Zosia & the Polka Towners. In 1983 the band released Polka Holiday. The album features both Polish and English Songs and Zosia singing.

Family plans only served to enlarge and enrich the band. In 1984, Kristine Piotrowski came into their lives and, soon after, Andrea joined them. Frank went out and bought two violins, sat Kristine and Andrea down, and began to teach them the fiddle. Once Frank saw that something may actually come of this, the band resumed performing in 1989 – the same year another family member appeared when Kristopher was born. In 1995, they released Special Request, an album featuring Kristine and Andrea singing and playing. In 1997 they released A Polish Christmas with “Pan” Franek & Zosia, featuring traditional Polish Christmas Carols (Kolendy) that are sung throughout the Christmas season.

In 1999, “Pan” Franek & Zosia’s Polka Weekend Stars came out. This album features the girls singing and playing on a variety of Polkas, Waltzes, and Obereks. In 2001, Erika, the fourth Piotrowski, was featured on Not Just Fiddling Around. Next, Kristopher who had played full time on drums in the band since 2003, initiated the thought of another album; Family Tree that features all of the Piotrowski children.

These days, the Polka Towners are traveling with the whole family, including Simon Peter Piotrowski playing his concertina. They bring to the stage their musical talents, as well as their wonderful, and at times comical, personalities. [source: http://www.cheboygan.com/ai1ec_event/summer-concert-series-pan-franek-zosia-the-polka-towners/]

This year, “Pan” Franek is happy to announce that they have come out with a new CD, “Family Drive”, featuring the whole family with great polkas, waltzes, obereks, and even some pop hits, such as “The Tide Is High”. Family Drive will be available to purchase at the festival, so they hope to see you this year at Taste of Polonia.

DO ZOBACZENIA i STO LAT!