Slebodni in USA was established by Marian Bryja in 1994 in Chicago, IL. The group instructors are Marian Bryja, Józef Waluś, Dawid Waluś, and Zuzanna Sołtys. The group represents Polish Highlander folklore which came from the Tatra mountains in the southern part of Poland. The word “ślebodni” means freedom. The group works under the patronage of the Polish Highlanders Alliance in America circle 37 Groń-Leśnica.

Most of the members of the Sledondi group were born in the United States, but they took on the traditions of their parents who immigrated to the United States from Poland and who were deeply invested in the Polish Highlander culture. The group members learned all of the traditional songs and dances at weekly practices. All of the members of the group wear traditional handmade costumes which have been imported from Poland. The musicians play traditional Highlander music using the violin and the bass. The members of the group represent the traditional songs and dances from the region of Podhale. The group performs at many Polish Highlander events and also at various festivals throughout North America including in Michigan, Wisconsin, Indiana, Colorado, New Jersey, New York, and Canada.

The group’s greatest achievement was earning second place last year at the 50th Annual International Festival of Highlander Folklore in Zakopane, Poland in the Second Category — an Artistic Interpretation of Authentic Folklore. 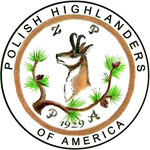 This event is brought to you by ZPPA. ☺